We are using temporal satellite radar data to measure the spatial and temporal variations in subsidence rates across the entire Delta, identify the nature of the factors controlling modern subsidence, and predict the Delta response to these forcing factors over the next century.  The interplay between natural and anthropogenic parameters controls subsidence rates and determines whether a delta progrades or erodes.  Natural parameters include tectonic movements and millennial-to-decadal climate changes accompanied by wide swings in aridity and moisture and sea level fluctuations, whereas parameters based on human activity are probably largely related to extraction of groundwater and natural gas and impoundment of the Nile River by the Aswan High Dam. Our preliminary radar interferometric (ERS-1 and ERS-2) studies over the northeastern section of the Nile Delta indicate that modern subsidence rates are high (up to 8 mm/yr) compared to average Holocene subsidence rates and that their spatial distribution is inconsistent with the distribution reported for the Holocene.  We are now expanding the ERS-based study area to include the entire Nile Delta.   A geodetic component will be included to provide ground based measurements and calibrate the motions inferred from the interferometric analyses.  The study will result in the assessment of subsidence rates throughout the entire Nile Delta and the identification of the factors controlling the subsidence.  Because we will be developing predictive tools that can potentially identify areas of high subsidence rates that are prone to sea water encroachment, our findings could be used to develop sound strategic plans for combating and/or modulating these adverse effects.  In this respect our findings could be vital to the livelihood of at least half of Egypt’s 80 million citizens that inhabit the Delta and depend on it for their sustenance.  All proposed tasks will be accomplished jointly by US scientists (from Western Michigan University and the University of Toledo) and their Egyptian colleagues (from the National Authority for Remote Sensing and Space Sciences) who will be receiving training in Egypt and USA on radar interferometric and geodetic applications. 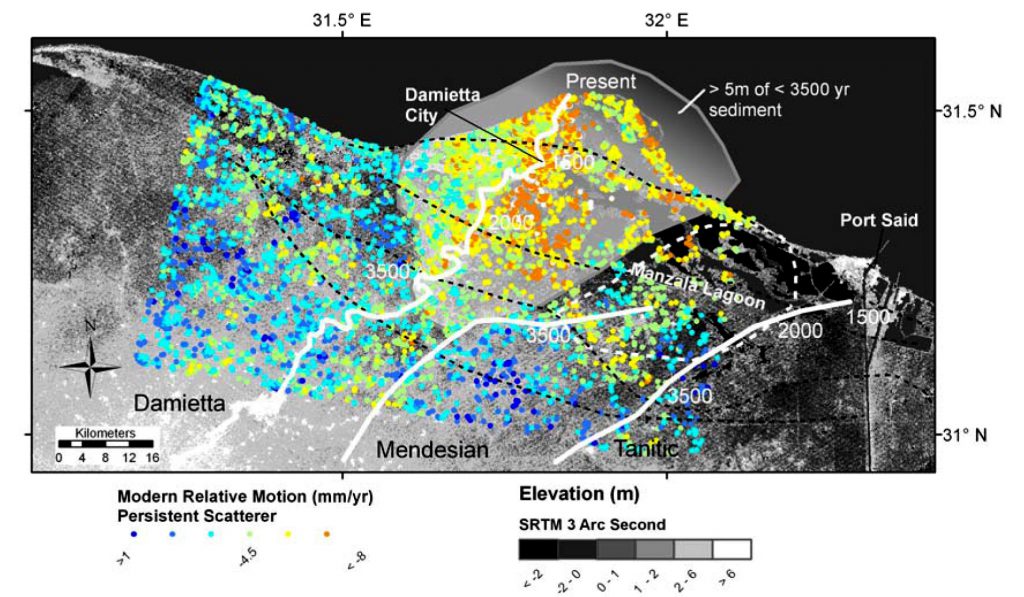 Mean velocities extracted from 14 ascending ERS-l and ERS-2-scenes acquired over the period 1992–1999 and expressed as vertical motion of permanent scatterers. 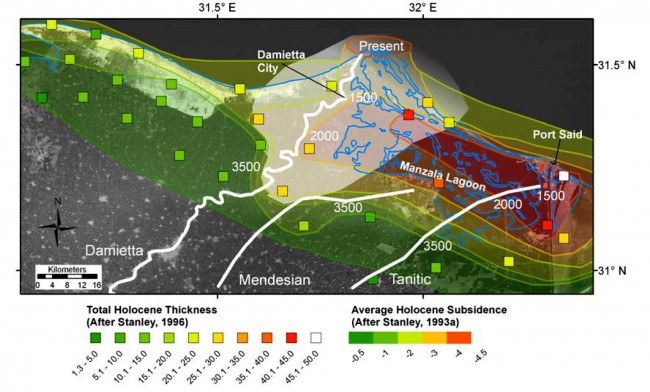